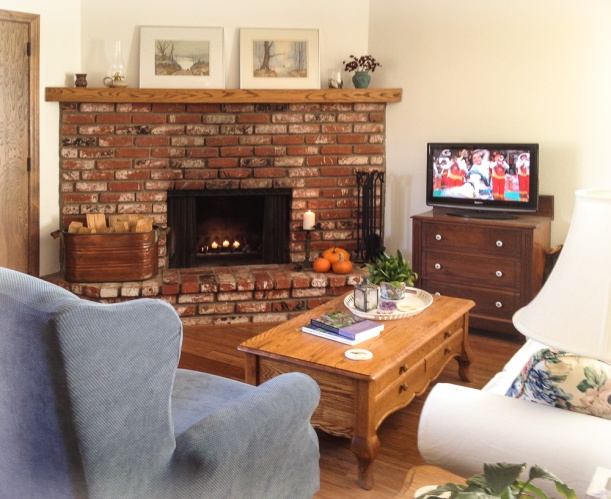 Everything is new this year, but some traditions go on, like watching the Macy’s Thanksgiving Day Parade on TV. Honestly, I don’t know why I do it, because I don’t even like it that much. But it’s been tradition ever since we got our first television when I was a child.

Back in the day, the parade was broadcast live, so if you lived in the Pacific time zone, you had to get up awfully early to see it. Dad, who worked a graveyard shift, would wake us up when he got home from work at six a.m.  Frankly, I’d rather have stayed in my nice warm bed, but the parade was not optional.

By the time I had my own family, the tradition was well-entrenched, but we had added our own little touches, like drinking eggnog while we sat in front of the TV. Later, after I moved eastward to Ohio and then to Maine, the parade came on at 9:00, a much more acceptable hour. My adult daughter and I would still watch it together in our pajamas (another tradition!) while drinking eggnog.

One year we discovered the National Dog Show on TV following the parade, and that became a new part of our Thanksgiving day ritual, one we enjoy more than the parade itself. This year we’re a continent (and three time-zone hours) apart, but we’re both watching the parade and dog show in our pajamas. She had eggnog. I forgot it. Oh, well.

I have so much to be thankful for this year! A new home, a whole new life. New traditions. I’m grateful for old friends and being able to keep in touch, and for my online friends who have moved right along with me and are just as close no matter where I live.

This morning, I lit candles on my hearth and watched the Macy’s Parade while talking to my daughter on the phone. I’m looking forward to sharing a feast with my sister and her husband and their closest friends later today. Life is good and I am blessed.

I hope today is a good one for all of you, my friends. Happy Thanksgiving!