Where I grew up, fall was welcomed for its cooler temperatures, but there was no spectacular visual display to mark the changing season. In those “long-ago” days, grocery stores sold pumpkins to carve for Halloween, but there weren’t the festive displays that are found everywhere now. Trees? Well, their leaves just turned brown and fell off. I didn’t know anything different. I’d seen pictures of New England autumns, but they were no more real to me than fairy tales.

Now I make my home in New England — and sometimes I do feel like I’m living in a fairy tale. The fall colors are so brilliant that it’s almost a relief when the leaves finally come down, leaving a more peaceful, monochromatic landscape.

Don’t get me wrong, I love all that color. It still amazes me every year, and I run around trying to photograph it all. But once in a while comes a day of fog and misty rain that transforms and softens the colorful world around me. 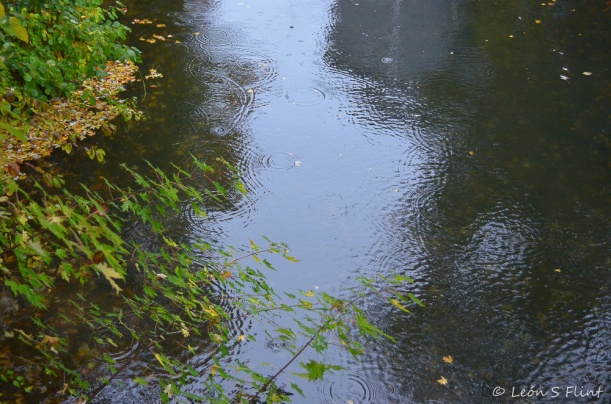 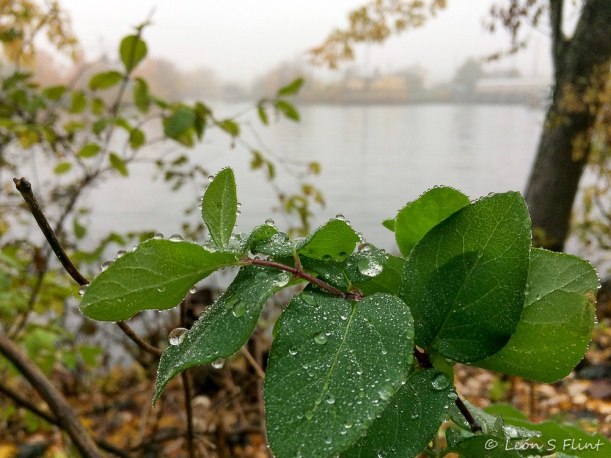 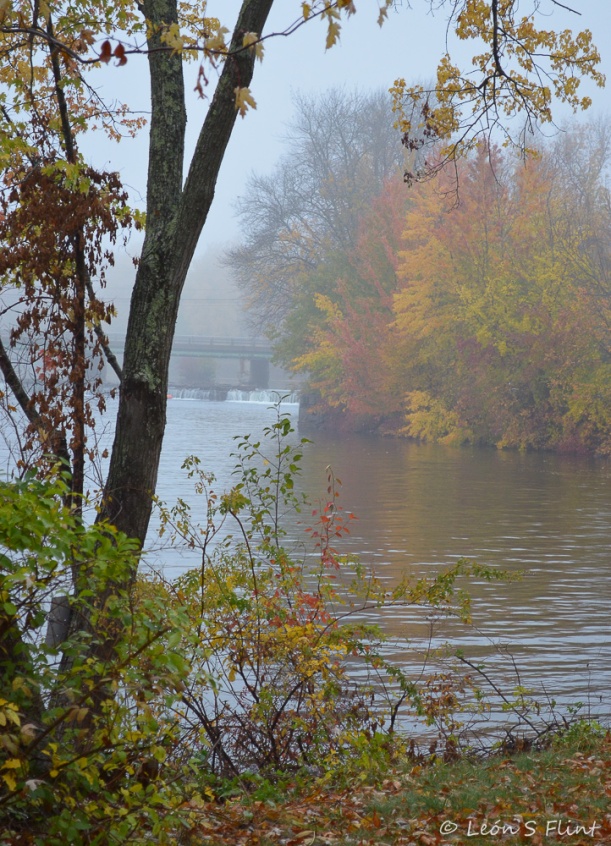 It sits looking
over harbor and city
on silent haunches
and then moves on. 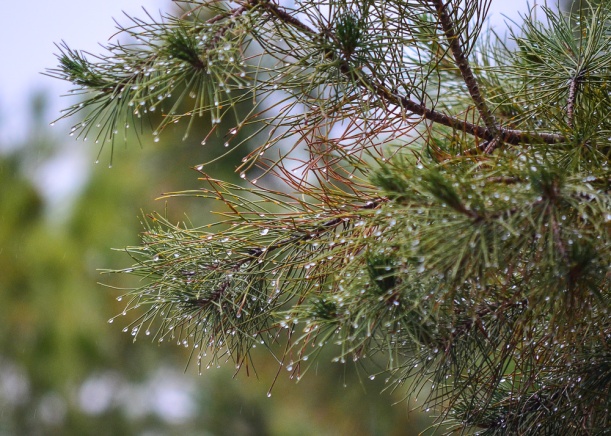 Do you remember the old children’s rhyme that goes:

Come again some other day.

As I looked through my photographs taken in May, searching for the one that resonated most with my heart, I realized that I’d photographed smoke in the sky from three different wildfires during the month. And it’s not even summer yet.

Before I moved here I looked up climate statistics for the area and learned that the average annual rainfall was between 8-1/2 and 9 inches. Pretty arid, right? Well, yesterday I looked up some recent actual rainfall statistics. In the year before I moved here, only 4 inches fell. And in the year since I came, we have had only 2.03 inches. That’s right, two inches of rain for the entire year.

It’s no wonder the squirrels and rabbits are eating every green thing they can reach in the garden, even things they normally don’t care for, like sage and lavender. There’s not much for them anywhere else.

So you can understand why, when I woke up on the morning of May 6 and saw raindrops suspended from the tips of the pine needles, I grabbed my camera to memorialize the occasion. We got a grand total of .06 inches (1.5 mm) that day. There’s been none since. It looks like it’s going to be a long summer.

You are welcome any day.

Linking with Kat Eye Studio for the May Photo-Heart Connection. Anyone is welcome to join in — come check it out. 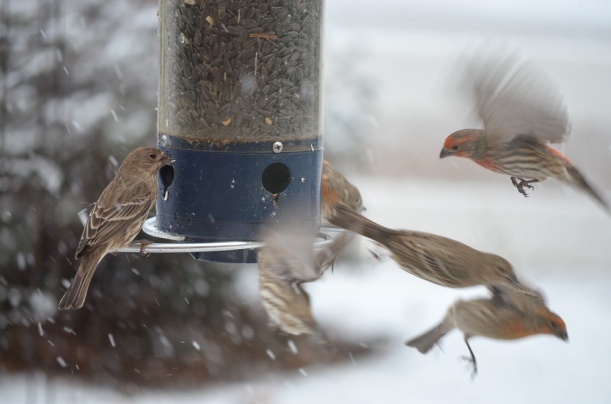 Hi — I’m back! I didn’t deliberately set out to take a month-long blogging break, but that’s pretty much what happened. Don’t know why, but I guess I must have needed it.

I can’t say I’ve got any deep thoughts or dramatic breakthroughs to report upon my return. But since my Word for 2013 is Explore, I thought I’d jump in with Kat Sloma’s Exploring With a Camera. Each month, Kat offers up a lesson on an aspect of photography, with clear explanations, how-to’s, and plenty of examples. This month’s exploration was “artistic blur.”

I spend a great deal of effort in trying to get my photos to be as sharp as possible. The concept of trying to blur a photo by moving the camera around during exposure, for example, or by deliberately not focusing before capturing an image is difficult for me to grasp. I tried some experiments for this lesson but, sad to say, they were not successful. However, in looking through my archives I found that I do use other types of blur to create the effect I want in a photo.

In this photo, I used a shallow depth of field to hint at the setting of this desert willow, but the blossom is clearly the subject.

In this case, even though it’s the grass that’s in focus, it leads my eye to the cottage in the background. For me, the cottage in the soft, warm evening light, with its sense of peace and quiet solitude, is the real subject of the photo.

I took this photograph because of the blur caused by a brief but intense summer rain pouring down the window.

While this image was taken on another rainy day, the blurred distortion of the clapboards is caused not by rain but by the wavy antique glass of the window that I was shooting through. 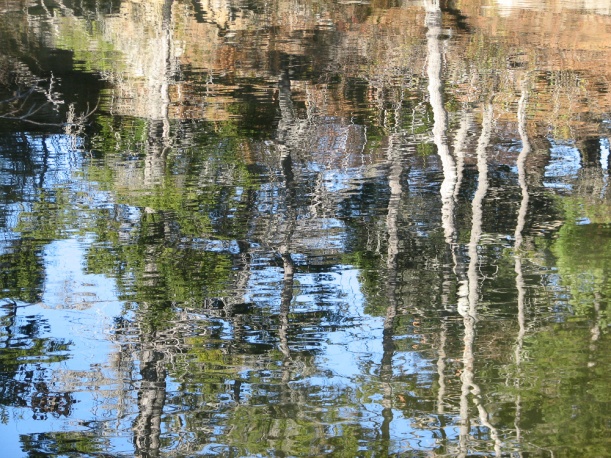 These are ripples of a different sort. The water in this cove seemed very calm, but the blurred reflection tells another story. This is one of my favorite reflection photos.

In this image of the Los Angeles skyline taken from the Angeles Crest Highway, the mountains and distant city are blurred by mist and rain.

This blurred water is caused by using a slow shutter speed, a common technique used by landscape photographers to give moving water that milky effect. To be honest, it’s not something I do often, but I was experimenting with it one day and this was the result. To me, milky water looks very unnatural; I prefer to freeze the motion, leaving the water clear. But I did enjoy trying and comparing the effects of different shutter speeds on this occasion, and I’ll experiment more with it in the future. 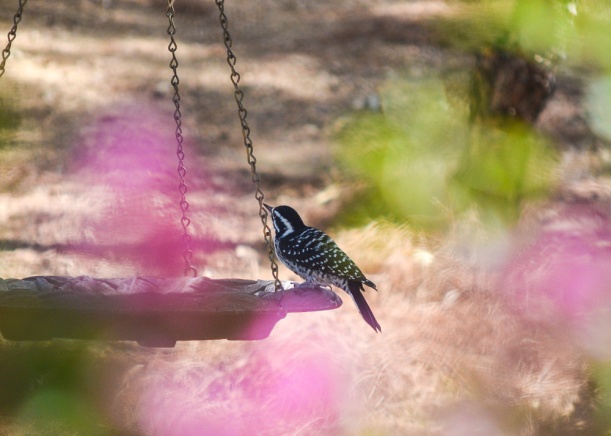 This effect was achieved by shooting through a flowering shrub. Focusing on the bird beyond caused the foliage to blur into a translucent wash of color. I’d like to say I did this on purpose, but I was quite surprised by the result when I downloaded the images.

The blur here is caused simply by hand-holding the camera. The interior of this church was very dark so the shutter speed was slow. It’s sharper than I expected to get, but I like the softness of the glowing candles.

My apartment in Maine backed up to the edge of a river, and I had wonderful views from my windows. I took a lot of photos through those windows, with more or less success. These are two of my favorites. I was shooting through a double paned window and a screen, which gave these images a soft-focus effect that I like. 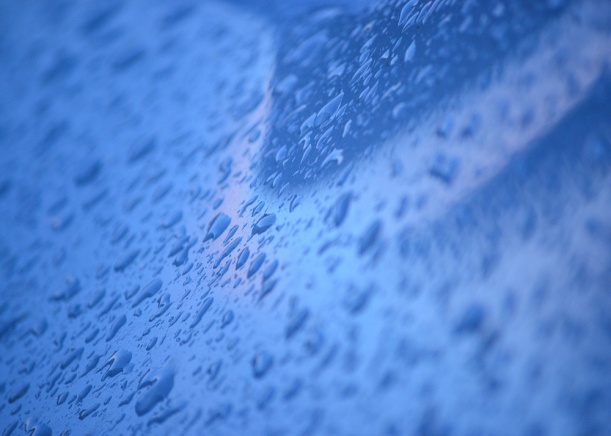 Car window + Raindrops + Reflected Sky + Wide Open Lens. Once I’d have just thrown this away, but I like it. So with this little abstract, I’ll close my exploration for now and go link up with Exploring With a Camera: Artistic Blur. I think I’ll make it just under the wire.

Happy Sunday! Though I might wish it were Saturday and the weekend ahead of me instead of almost over. Anyway, it’s time to join Ashley and friends for Scavenger Hunt Sunday. The items for this week are: Whimsy, Create, Dust, Seed or Sprout, and Swing or Drop. Here are the images I found to match.

I found a trail of a child’s little footprints on the beach this week, and couldn’t resist putting one of my own next to hers to compare the size. I’m still blown away at being able to go barefoot on the beach in March. Not that I’d want to do it today, for the weather this weekend is much more normal for this time of year, i.e., cold and wet.

I could as well have used this image for whimsy. It was those swooping, apparently purely decorative beams and their shadows that made me put on the brakes and pull over to take a few photos of this building under construction. I have no idea what it will be. There were signs identifying the construction company and the bank that’s financing the project, but nothing to indicate the owner or the designer of these creative flourishes. 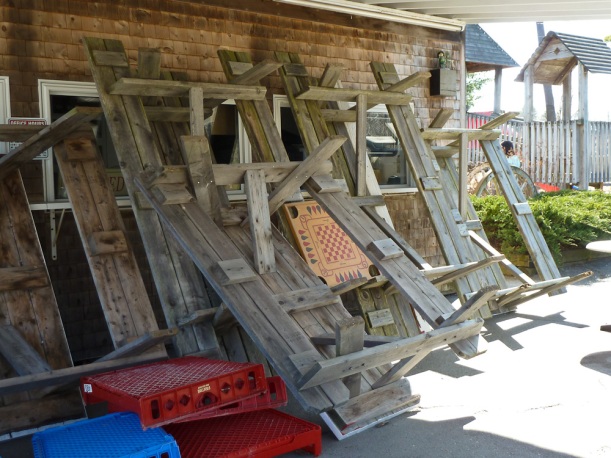 The “season” doesn’t officially start around here until Memorial Day weekend. This little lunch and ice cream stand, located next to an active swap meet, is very busy during the summer months. Those tables and benches will be full and there will be lines at every window. Until then . . . they’ll continue gathering dust.

The Daffodils Are Coming

I stopped by Laurel Hill Cemetery last week to check on the daffodils. I’d say they are about a month ahead of their usual schedule. There are thousands of bulbs covering a sunny hillside that slopes down the the river, and the annual spring display is spectacular. The blooms are starting already, and I’m guessing they will be well underway in another week or so. Meanwhile, I loved the afternoon sun shining through the sprouting leaves.

It’s 40 degrees cooler today than it was mid-week, cloudy and raining off and on. I took this shot from my front porch just a few minutes ago. The largest drop has an upside-down image of the apartment building across the street in it.

I love being home on a rainy day! Now I think it’s time for a cup of tea. I hope everyone has a good week.